Unless you’ve been living under a rock for the best part of the last two decades, you’ll be familiar with the terms quidditch, Azkaban, muggle, Hogwarts, butterbeer, and wrock.

The more pertinent question is: in what order did the Harry Potter films arrive? Can you correctly name all of Harry, Hermione and Ron’s adventures?

Don’t worry if you can’t – let’s enjoy a rundown of Potter first. 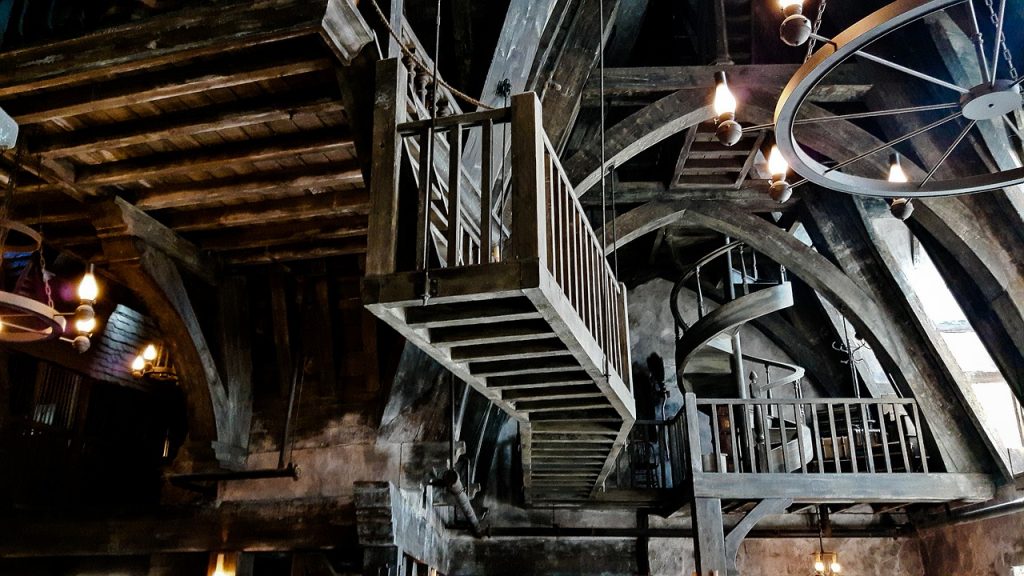 Harry is a fiercely protected fictitious character created by the mind/pen of author J. K. Rowling in the early 1990s. During a delay on her train journey from Manchester to London’s King’s Cross station in 1990, the story of what became Harry Potter and the Sorcerer’s Stone came to her in a vision; and over the next five years, was fleshed out as seven more books following Potter’s wizardly adventures.

The titular character, Harry Potter – who Rowling herself describes as “this scrawny, black-haired, bespectacled boy who didn’t know he was a wizard” – is the main protagonist throughout the series, based on Rowling’s equally best-selling books that cover seven years in the life and times of the orphaned Potter.

this scrawny, black-haired, bespectacled boy who didn’t know he was a wizard

Only learning on his 11th birthday that he’s a wizard, he enrolls at the Hogwarts School of Witchcraft and Wizardry to practise magic under the guidance of the kindly headmaster, Albus Dumbledore, and other professors.

It isn’t long in the run of things before the personable Harry discovers that his only fate is inextricably linked to that of his series-long nemesis, the feared dark wizard Lord Voldemort. Who, it later materialises, was responsible for the murder of his parents.

Harry’s discovered languishing in an under-stairs cupboard at the hands of the despicable Dursley’s into whose care he was entrusted in the wake of his parent’s untimely demise. Much to the Dursley’s anger, the wizardly-one learns of his extraordinary gift on turning 11 years old, and enrolls at Hogwarts Academy; whereby he’s isolated from muggles.

After befriending magical creature-obsessed Hagrid, the reluctant boy-wonder boards the Hogwarts Express from platform nine and three-quarters at King’s Cross station, and is instantly whisked away to a new life. Despite the unwanted attentions of Lord Voldemort’s former sympathiser and Hogwarts alumni, Draco Malfoy and the disciplinarian teacher Severus Snape, Harry throws himself into life (and Quidditch) at the academy, and makes enduring friendships with bookish Hermione and hapless Ron Weasley.

Unbeknownst to young Harry, Voldemort is in hiding at Hogwarts, and regaining his powers; as well as plotting Potter’s downfall. What’s more, he’s after the Philosopher’s Stone, too, which was entrusted to Dumbledore by a famous wizard alchemist, with his new compatriot aiding and abetting him in his duals with Lord Voldemort.

Immersed in his second year at Hogwarts, Harry becomes aware of a mysterious voice which appears to be emitting from the school walls. As the voice becomes increasingly menacing, this coincides with vicious attacks taking place on fellow students at the wizard’s academy.

It doesn’t take Harry long to realise that someone is wittingly opening the ‘Chamber of Secrets’, and in doing so releasing the monster languishing within. Events take a more dramatic turn still when Ron Weasley’s sister, Ginny, is the victim of kidnap and held hostage in said chamber.

Mounting a daring rescue mission to locate and ultimately free Ginny from her unseen captors, Harry and his gang quickly make their way down into the uninviting Chamber of Secrets and find Ron’s sibling. He subsequently acknowledges that his arch-nemesis, Lord Voldemort, was possessing Ginny courtesy of an enchanted diary, and was channeling the evil to coordinate the monster’s attacks on Hogwarts’ students.

Suffice to say, with a grand finish, Harry saves Ginny and, as a result, both he and Ron are hailed as heroes on their return.

This is the one where Harry is introduced to his uncle, Sirius Black, for the first time; only his uncle turns out to be a werewolf/deranged killer who has recently escaped from Azkaban prison and is hell-bent on catching up with/murdering his nephew/the teenage wizard.

To make matters worse, Ron’s sickly pet is then revealed to be a wizard called Wormtail in the aftermath of being relentlessly tormented by Hermione’s cat; which literally (and physically) sets the cat amongst the pigeon. But the cat in question is not a feline one, but rather a swarm of Dementors recruited to protect Hogwarts from Uncle Black.

Clearly worried by the advent of all this, a magic-wielding/now slightly more mature Harry enlists the help of a teacher of the dark arts to help him overcome his fear/demons. However, that tutor harbours a secret tie to Harry’s deadly uncle, who may turn out to be a friend after all.

This film kicks off with Harry attending the Quidditch World Cup with the Weasley family and Hermione, where all assembled witches and wizards are privy to Lord Voldemort’s ‘Dark Mark’ being etched in the sky above them; an ominous sign of things to come.

This fear and trepidation are short-lived by the imminent prospect of the year-long Triwizard Tournament. Some inter-school completion that Harry is too young to participate in, but that doesn’t stop Potter being entered via a mystery benefactor, who it’s later discovered has an ulterior motive – one which spells trouble for Harry.

Also, along the way, we learn that the Dark Mark and the Triwizard Tournament are not related after all; Hermione campaigns to free the house elves from slavery, and everyone hates muckraking journalist Rita Skeeter. And to cut a long story short, the Triwizard tournament ends with a twist, and the celebrations barely begin before Harry is sucked into another battle with Voldemort. Although Potter emerges the victor, Voldemort’s powers are increased, which doesn’t bode well for the sequels. 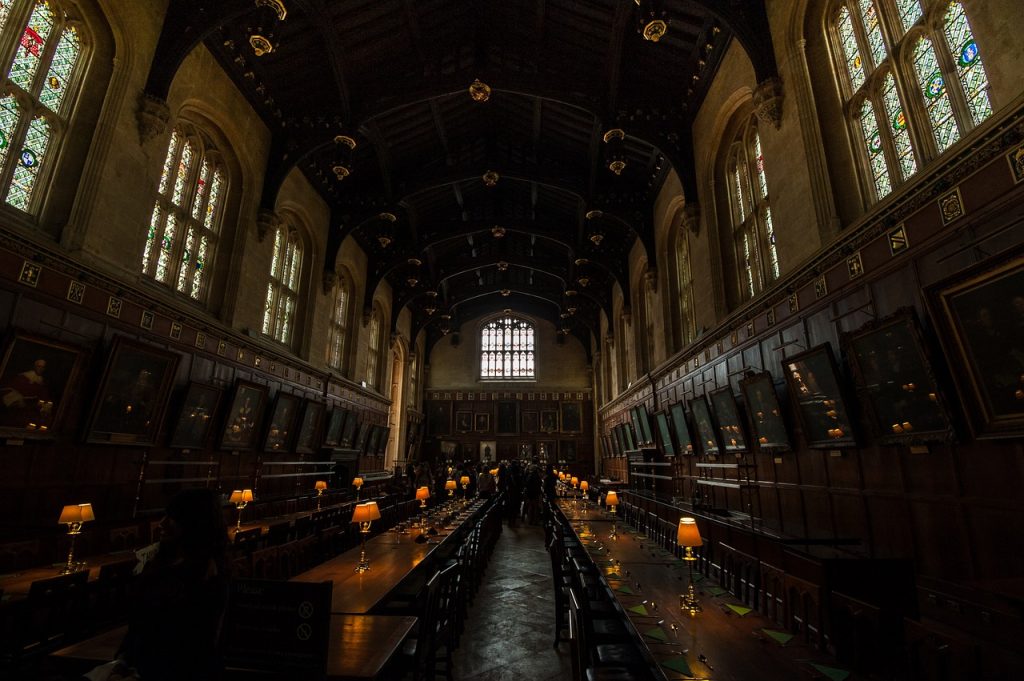 As Harry enters his fifth year at Hogwarts, it becomes clear to the wizardry apprentice that many within his community have failed to acknowledge the truth regarding his recent brushes with Voldemort. Still, his focus is otherwise engaged by the appointment of Dolores Umbridge as the new Defence Against the Dark Arts teacher; ascended to the post by Minister of Magic, Cornelius Fudge, as a means of protecting his role from Dumbledore.

However, Umbridge’s teaching is somewhat below par, are her methods cruel. Consequently, Harry and his friends recruit a talented team to counter this thinly-veiled threat and defend the school against what Potter perceives as a rising tide of evil.

In this installment, we bear witness to Death Eaters wreaking a destructive course in not just the wizarding world but the Muggle world, too (muggle’s being lesser mortals). On the back of this, it becomes apparent that Hogwarts is no longer the safe refuge from evil it once was; especially as Harry grows increasingly concerned about new, unseen dangers lurking in the very walls of the academy.

Conversely, Dumbledore is less sympathetic and insists that Potter steps up his magic classes to confront Voldemort for the final battle which lies ahead. However, an even greater threat to peace and love and goodwill to all men/women and wizards comes in the form of affairs of the heart.

With teenage hormones running rampant through the castle, a new menace makes its presence felt. And while love may hang in the air, tragedy looms; resulting in Hogwarts never being the same again.

Having successfully pinpointed the source of Voldemort’s immortality, Harry, Ron, and Hermione set out to put an end to the Horcruxes’ rule of evil. However, that’s easier said than done without their Hogwarts professors ‘having their back’.

Minus the guidance of said tutors, the plucky triumvirate realises they must rely on each other now more than ever, as the gathering dark forces threaten to destroy their alliance. Meanwhile, Voldemort’s Death Eaters are filling their boots, having wrestled control of both the Ministry of Magic and Hogwarts, where they are frantically trying to track down Potter – elsewhere, the latter prepares for the impending day of reckoning with his arch nemesis.

The final installment of the successful franchise sees a long-awaited final clash between good and evil with Harry, Ron, Hermione, and Lord Voldemort. During the intervening years, Potter has acquired a boost of confidence in his skill set and is now on something of a single-minded mission to rid the world of evil once and for all.

But before any of that can ring true, firstly, there’s the small matter of finding the Horcruxes which, as we discovered in the last cinematic outing, are Voldemort’s lifeblood. Eventually, Potter and Voldemort’s paths cross at Hogwarts, and the scene is set for an epic showdown where the forces of darkness finally may meet their match. Finally, the adventure comes to fruition.