The mood of a film is essentially what affords said film its classification.

Film noir is a genre that’s still a grey area to some and remains shrouded in mystery. If asked to describe the predominant ‘moods’ (or cinematic ambiences) which give traditional film noir examples their somewhat beguiling title, then these are, primarily, a heady mix of melancholy, alienation, bleakness, disillusionment, disenchantment, pessimism, ambiguity, moral corruption, evil, guilt, desperation, and paranoia.

The Meaning of Film Noir

As for the meaning of the film noir genre, we don’t have to look any further than the French language – the country the style originated.

It translates as black film (or film of the night). This turn of vernacular derives from the describe-all term, serious noir – used to colloquially describe a line of cheap paperback novels which translated American crime authors and went on to subsequently find favor with French audiences.

What are the characteristics of film noir?

For a start, they tend to be filmed in monochrome yet, unlike a lot of other black and white motion pictures from back in the day, aren’t silent.

The underlying reason for the monochrome aesthetic is to accentuate the graphic in the shadows element, and it emphasizes the underlying lack of happiness conveyed in the genre. Moreover, many film noirs were made in the 1950s when color film was still very much a premium.

The setting also plays a pivotal part in the film noir conceptualizing process and, historically, tend to be amid distinctly urban scenes, such as apartment blocks and dimly-lit back alleys. Indeed, such scenarios are usually filled with dark corners, shadows, and little lighting, which suggests to the viewer that there could be more than meets the eye.

Lighting is of utmost concern in the mind of a director of a film noir production and goes a long way to illustrate the genre best. The shadows and darkness are considered elements which are present through design rather than by accident. Be it uncertainty or anger, the mood created by such light and associated props typically reflect off the faces of the leading players in a film noir.

Reflections per se are the compositional lifeblood of film noir, as they can share truths with the audience that the character can’t; ergo delivering a unique perspective on tension and excitement. It also works wonders to highlight conversations between two people.

Meanwhile, smoke (or smoking) is a favorite tool of the film noir director, not least because it expands on the sense of inherent mystery and allure found within a scene, or for that matter, an actual person. It coaxes the viewer into believing that there might more than initially meets the eye. Like it or not, handguns form a recurrent theme in film noir episodes, as they often represent the action dynamic of the movie – promoting a heightened sense of danger and raw pictorial excitement.

In terms of additional film noir fixtures and fittings, Femme Fatales are pretty much omnipresent. Beautiful, seductive woman who would just as soon kill you as love you, their personal traits – aside from cold-blooded assassin – extend to the realms of promiscuity, double-dealing, and unrealizable, and who live/love for danger and danger alone most of the time.

Femme Fatales – dressed in red with a low neckline, lots of mascara, floppy hats, high heels, elbow-length gloves, fur coats et al., also have a habit of falling head-over-heels in love with the main character in film noirs, too. And for every femme fatale, there’s a male detective; true to most film noir scripts, they have a downfall which is, unsurprisingly, often the femme fatale. Although, alcohol comes a close second. Hard-hearted, cynical, morally ambiguous, yet a have-a-go hero to boot. Fedoras and suits (detectives and/or mobsters), the audience knows from the outset that crime is going to take center-stage in most film noir movies.

A Brief History of Film Noir 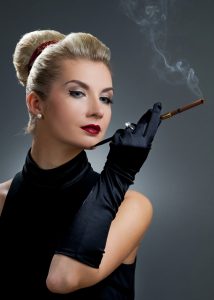 The turn of vernacular film noir was first imposed on Hollywood by the French critic Nino Frank in 1946, yet most US movie industry professional neglected to acknowledge that genre immediately, leaving it to cinema historians to lend definition to the category retrospectively.

These American thrillers that sought to mirror the urban malaise and social anxieties of the 1940s and 1950s were coined film noir based on a triumvirate of visual and aural clues; notably anti-heroic characters, biting dialogue shot from the hip, and bold aesthetic design.

At first, even the selected critics who ambitiously christened the cinematic movement film noir weren’t singing from the same sheet when it came to uniformly labeling conventions. Even the heyday was widely disputed amongst fanboys and girls, with some arguing that the specifics were the post-World War II 1940s to around 1958, going on to stereotype films made before and after proto and neo-noir respectively. While others remain adamant that film noir is more of a style or mood than a genre, irrespective of implicated timelines.

For all this conjecture though, the establishment later decreed that film noir did, in fact, take shape during World War II, when German émigrés like Fritz Lang brought an experimental sensibility of German Expressionist cinema to Hollywood. It was at this juncture that directors first practiced what’s referred to in the industry as ‘high-key cinematography’; that which focuses intently on bright, direct light sources, and cascading shadows. Add to this heady mix a dose of off-kilter camera angles and asymmetrical compositions with a mandate to emphasize sordid stories meant to thrill and intrigue.

Being ever mindful of the 1930 passing of the Motion Picture Production Code, where it was legally binding that movies weren’t seen to endorse immoral behavior, noir films of the 1940s portray the seedier sides of life. They dispense with graphic violence, lustful kissing, or even depictions of men and women sleeping in the same bed. Kisses are frantically cast rather than lingering, while adulterers are dispensed with before their affairs are enjoyed beneath the full glare of the rolling camera. Necessarily, a lot is graphically implied and less strictly acted out.

By a similar token, murders are shot suggestively, never explicitly. But this approach wasn’t set to go the distance, as inevitably TV culture and the success of foreign movies with a more relaxed stance when it came to ethics had a knock-on effect with film noir, with Tinseltown finally relaxing its puritanical grip. Cue the emergence of films like the morally ambiguous Fallen Angel (1945) and Anatomy of a Murder (1959); the latter challenging previous cinematic outings which often dealt with the controversial topics of murder and rape.

Famous Examples of Film Noir and Actors Who Feature Prominently

They all feature prominently in key film noir roles. It always strikes us as remarkable when considering just how many Hollywood big guns had their careers launched in film noir, before them going on to become household names. Take, for example, Burt Lancaster, Kirk Douglas, Richard Widmark, Yul Brynner, and Charlton Heston, all of whom starred in noir pictures. While Glenn Ford – along with Ava Gardner, Alan Ladd, and Rita Hayworth – enjoyed breakthrough roles in film noir after initially struggling to gain acting footholds in the Hollywood hills.

Although Lancaster, Douglas, and Heston would eventually seek to define the macho leading man, during their film noir episodes, they all portrayed somewhat weak individuals easily influenced by women.

Most of the mentioned films and directors have instilled rudimentary noir concepts on their works of cinematic art, taken themes centered around crime, and ran with them. It’s not merely the subject of crime that links the generation-spanning motion pictures, as other critical noir elements that have survived the journey include moral ambiguity and corruption, black comedy, middle-class crime, identity crisis and, naturally enough, the femme fatale.

Far from fading over time, film noir has, conversely, lived on and prospered, and even given wings to a new version of stylistic events courtesy of neo-noir movies.

Revivalist momentum has seen the welcome emergence of unique and entertaining new styles borrowed from existing themes, all of which perpetuate the genre and enchant old and new appreciative audiences in equal measure.  The legacy of these films is attested to by the fact that the modern film stars, fans, and industry still hold film noir in high esteem. To underline this, not so long ago (2006), the Academy Awards paid tribute to film noir in its ceremony of that year, thus confirming its relevance to the modern film industry.