The film “Under the Tuscan Sun” had its premiere in Los Angeles in 2003 and made Americans fall in love in Italy. It has everything that a good comedy requires and is a great feel-good movie for anyone who is looking for their way in life.

Most of the shots were filmed in the picturesque Italian town Cortona, near Arezzo in Tuscany. The charming hills around Tuoro Sul Trasimeno and Lake Trasimene also played an important background in the movie. Keep reading to discover other places that made this film look magical.

What Places Appear in Under the Tuscan Sun?

The primary scenery that appears in the film is the charming city of Cortona. Nestled between the Valdichiana and Tuscan Valtiberina mountains, with reminiscences of Etruscan culture and ancient buildings, it adds a romantic vibe to the plot. Frances Mayes lives in this city for most of the year.

One of the film locations that appears in the film is Piazza Signorelli. If you saw the movie, you might remember it from the scene near the fountain. Fun fact, in the real piazza Signorelli, there is no fountain. It was added by the producers to add a bit of Hollywood glamour to the scene.

The crew used Piazza Della Repubblica to shoot the scene with the market. The original Villa Bramasole that appears in the film is not the “original” one, as it had been renovated. To convey the story, the filmmakers decided to use Villa Laura, which was still in need of a fix.

The scene of the date with Pawel was created in the Teatro Signorelli in Cortona. The same place was used by the crew to film some of the interiors.

While Cortona was the main background to the story, it was not the only city that was used in the film. A flag-waving show scene was shot in Montepulciano.

Cinecitta is a film district created by Mussolini. It’s often called the Italian Hollywood. The creators of “Under the Tuscan Sun” used it in the movie. Their scenes from Patti & Grace’s San Francisco apartment were filmed there. Also, a bookstore that appears in the story was created there. 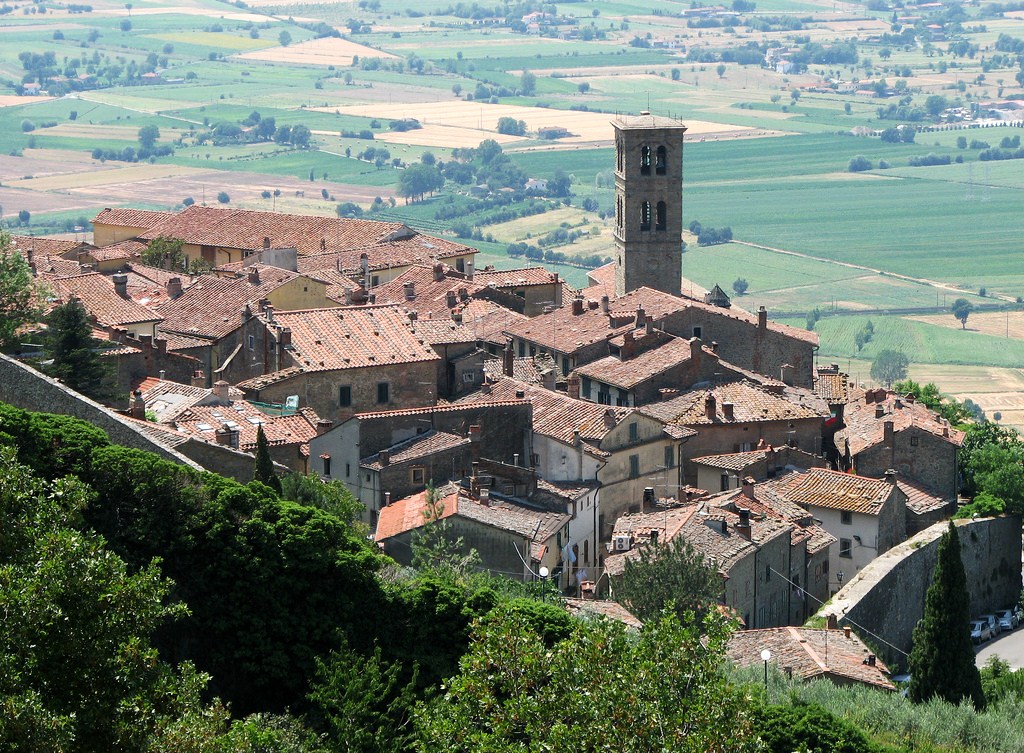 Under the Tuscan Sun is a romantic comedy-drama that tells a story of a recently divorced woman, Frances, who was cheated on by her husband and, influenced by her best friend, decided on a trip to Italy. There, charmed by Tuscany, she bought a collapsing villa.

The story speeds up when the main character hires a crew of Polish immigrants to help her refurbish the house. Over time, the main character develops relationships with the person who sold her the villa, the Polish workers, and an eccentric British actress.

Who Created Under the Tuscan Sun?

The story is based on Frances Mayes’ memoir with the same title. The film was produced and directed by Audrey Wells. Diane Lane, who played the main role, received a Golden Globe Award nomination for playing Frances.

From the Bestselling Book to the Successful Film

The book on which the film was based was a New York Times Bestseller for more than two and a half years. The story was translated into 54 languages. In the book, the reader can find a few chapters that the author dedicated to recipes which they can use to create traditional Tuscan dishes in their own kitchen.

This romantic story in which the blissful lifestyle of a typical Tuscan town played the main role was a great cinematographic success.

Under the Tuscan Sun Tours

Let’s be honest, this movie perfectly shows the Italian dolce vita that everyone dreams about. Once you watch it, you might feel like packing your things and doing the same as the main character. If you are not yet ready for such a drastic step but would love to see places from the movie, you can visit the mentioned places, or even get an organized tour that is dedicated to all the places that appear in the movie.

Under the Tuscan Sun encouraged many people to visit Italy, especially stunning Tuscany, and there is no doubt that the movie and the book boosted tourism in the region.

If you are enchanted by Tuscany and its romantic vibe, you can also get married here. Maybe you are not going to be able to get married in the same villa, but Tuscany is full of beautiful places and similar spots where you can say yes to your loved one.

Under the Tuscan Sun is one of those movies that stays in the memory of the viewer not only because of the amazing and heartwarming plot, but also thanks to its stunning scenography. This movie is a unique anthem to Tuscany.

The best part of it is that you can almost see all the places in which Frances was looking for lost happiness. So, make a list of places you must see when you arrive in Tuscany and get your tickets.

Cortona can be your first choice, but once you follow the steps of this magnificent story, you can be sure that the area is full of stunning places you might fall in love with.