There are many different kinds of art and they have all changed to some extent over the years. Here I’m going to run through the progression of art from early man to the modern day. Hold on tight, it’s quite a ride! 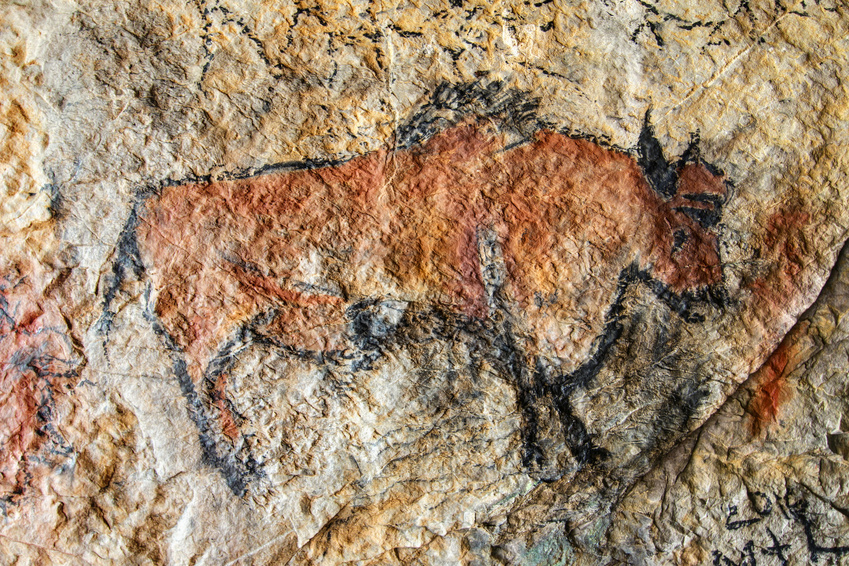 Palaeolithic art (also known as prehistoric art or Ice Age art) is the oldest art to be found in the world. It dates from around 40,000 years ago, but continued until about 12,000 years ago, with wonderful examples having been found in Africa and Europe. But it’s not just cave paintings; jewellery, carvings, sculptures (made from clay, bone, stone, and ivory), and even engravings have also been found and dated back to the same time. Subject matter included the animals that were hunted, predators to be wary of, and the human form itself, especially the female form.

Ancient art, dating from around 3500 BC, hails from Egypt, China, Persia, Mesopotamia, and Greece. Ancient art shows the beginnings of more imaginative works, which focus less on what could be seen in everyday life, and more on what might be seen in the afterlife. Gods and goddesses were particularly popular subject matter, as was what these deities would do once a person had ‘crossed over’ to their kingdom. Symbolism was rife in ancient art, and the art itself was used as a way of instructing the common people in the laws, practices, and religion of the country.

In Egypt, for example, the pharaohs were also captured in art, and would always be shown as the largest figure in a painting. This was to show the pharaoh’s importance and was not drawn to scale. Animals were often depicted but were drawn in unusual colours, each one having a different meaning.

The period of medieval art covers around 1,000 years of history, and it is difficult even for the experts to pin down exactly what makes medieval art. Because of this, it is often broken down into sub-periods, including Byzantine, Insular, Gothic, and Romanesque, as well as many others. 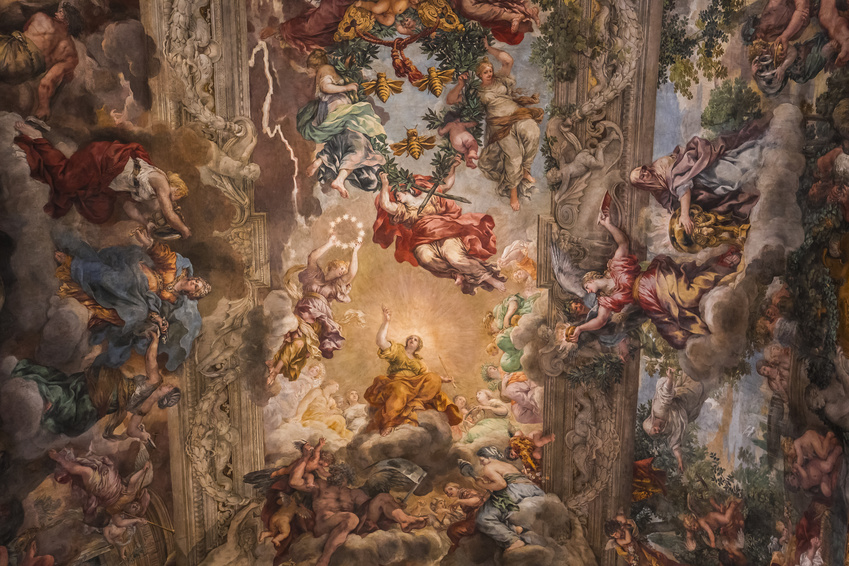 The Renaissance period began in Italy in approximately 1400. This was a time of huge leaps in science, literature, and art, and it all came together to create a bubbling cauldron of mixed genres, media, and ideologies. The ‘barbaric’ times of the medieval period were slowly being forgotten, and the Renaissance was a time of enlightenment in which, some historians suggest, humankind took its biggest leaps forward. It follows, then, that art was also much more advanced by this stage. This was a new era and was an exciting time to live. The art of this period reflects this excitement, as well as the concerns that the artists had regarding politics, science, and religion.

The world was growing richer, and Italy especially had money to burn thanks to new trade routes opening up, and new products to sell. Literacy was at its highest level to date, and studies of older art were beginning in universities of the time. This created a revival in the arts, and is why much Renaissance art is reminiscent of earlier pieces, with an up to date perspective. Thanks to scientific endeavours, more was known about nature and the universe, and this was often depicted in Renaissance art, with less emphasis on religious figures (although this was still a popular subject matter).

Two hundred years after Renaissance art began, Baroque art took its place. It began in 1600 in Italy, but was soon found in most of Europe. The church, perhaps worried about how much more secular Renaissance art was becoming, staged a comeback and employed a number of artists to produce impressive works of art with a religious theme.

The idea caught hold, and the Baroque style, with its dramatic flair and exuberant style was soon the art of the moment. Baroque art was big and bold, and the artists weren’t afraid to use colour and movement within their works. Soon enough, the nobles decided that this was the art for them, and competed with one another as to who could find the most impressive art for their homes.

These homes themselves then also became part of the baroque style, with grand staircases, enormous entrance halls, and sweeping architecture being added.

Neoclassicism means ‘new classicism’, and it is the style that Europe went back to after the grandeur of the Baroque period had faded. Drawing on inspiration from ancient Greece and Rome, the 18th century began with a step back from the art that had gone before, almost as though the western world was taking a breath.

This new, pared down art, was a far cry from the excesses of the Baroque period. This period also coincided with the Grand Tour, in which the sons of noblemen would go travelling through Europe. On their way, they would collect art to bring home, and thus the fad for more minimalist art grew.

Neoclassicism was all about simplicity, and the style has continued to the modern day. 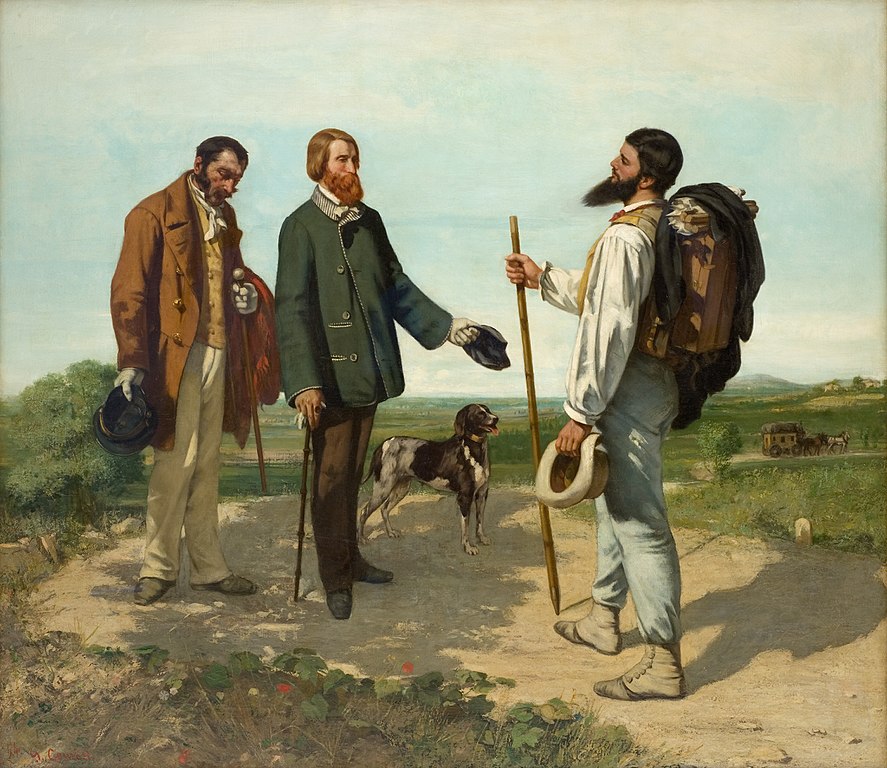 Realism began in France after the Revolution of 1848. It seemed it was time to face real life, and show it in all its sometimes wonderful, always gritty reality in art. The people of France had seen many terrible sights during the revolution, and many wanted to ensure that the rest of the world became aware of what had happened; art became the conduit by which that was able to happen.

No longer were paintings exotic and fanciful – now they depicted real-life situations, no matter how sordid or unpleasant. Landscapes showing rural life, visions of cities full of beggars or the lame, commercial and industrial life was all shown in the period of Realism. And it wasn’t just the subject matter that became truer to life – the figures shown within did too.

The period of modernism starts in around 1860 and continued into the 1970s. Artists who enjoyed success during this time (or who created art in this period which was subsequently found to be popular, after their deaths) include Cezanne, van Gogh, Toulouse-Lautrec, and Matisse.

Tired of the brutality of realism, the artists turned again and started to manipulate the world around them, changing it to create a more modern, more dreamlike version of it. No longer was art required to show what was happening, as newspapers were doing that job; now artists could create anything they wanted to, without needing to give it a narrative. 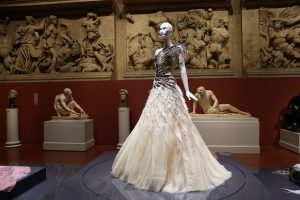 If modernism was thought to be abstract, then contemporary art was a shock to the system of many. Beginning in the 1970s as a new and innovative way to create art, contemporary or postmodern art continues today and includes well-known artists such as Tracey Emin and Damien Hurst. Defined as having no definition, contemporary art is a mixture of genres, styles, and media that means different things to everyone who sees it.

Contemporary art is about making your own narrative, using your own life experiences to influence how and what you see.

How to find inspiration for your art – https://9mousai.com/how-to-find-inspiration-for-art/

How to make it as an artist – https://9mousai.com/blog/how-to-make-it-as-an-artist 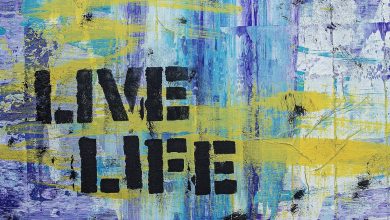