The history of art is long and littered with romance. We are taking a look into the lives of famous artist couples to see how they have made their mark amongst society, and how they have inspired us along the way.

The journey of an artist is usually a personal one, as the work created tends to generate from personal views and experiences. Having said that there are a number of artistic couples who’s art has inspired us over the years, showcasing a likeness between the two.

This well-known couples work was fuelled by personal tragedy, Mexican culture and strong political views. Both artists used vibrant colours, engaging their audiences with self-portraits and mural-style paintings. The passion gone into each piece of art speaks for itself, portraying the deep emotional feelings of how they dealt with life and important issues that directly affected their culture and surroundings. 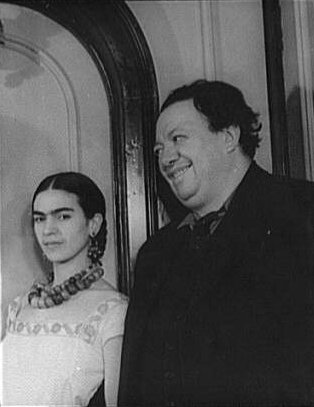 Diego traveled to Europe; Italy, Spain and France while studying. Inspired by Pablo Picasso and Paul Cezanne’s work during the French Art Movement, in 1917 Diego’s art became recognised enabling him to showcase his work at numerous exhibitions. His outspoken Murals have been placed at the following locations: Secretariat of Public Education, Mexico City: National School of Agriculture at Chapingo, near Texcoco: Cortes Palace in Cuernavaca and the National Palace in Mexico City.

He then moved onto commissioned Murals at The Museum of Modern Art in Russia, at the City Club of the San Francisco stock exchange and the Mural: ‘Man At The Crossroads’ at the Rockefeller Centre in New York City.

While Diego’s art murals were influenced by political issues, Frida’s art was more personal relating to a bus accident she encountered in1925. Leaving her with severe injuries, to name a few: A broken spinal column, broken collar bone, broken pelvis, as well as a handrail that had lodged and pierced her abdomen and uterus, ultimately affecting her reproductive organs.

Frida spent three months recovering in a full body cast, went through 35 operations, ending up on bed rest most of the time and although she regained the strength to walk again, the constant pain limited her quality of life.   During the days she was immobile, Frida would paint from her bed, much of her work self-portraits that highlighted the frustrations of her condition. The accident left her unable to have children and is often portrayed in her work because of the miscarriage she had experienced.

Frida first met Diego in 1927 a fan of his work, with four paintings she approached him as he was working on a mural at the Public Ministry of Education. The two formed a bond and began dating, even though Diego was married to his second wife Guadalupe Marin at the time. 20 years her senior, they eventually married in 1929, much to the objections of Frida’s mother who disapproved of the couple.

Their marriage over the years was rocky, Frida had affairs with both men and women, in particular, her affair with Hungarian Photographer Nickolas Muray in 1938 lasted 10 years. However in 1939 when Diego had an affair with Frida’s younger sister Cristina, the couple divorced. They did re-marry again in 1940 and remained married until Frida passed away in 1954 at the age of 47. Diego Rivera passed away in 1957, a memorial museum: The Blue House, which was Frida’s home and today a Museum in Frida’s memory is located in the small town Coyoacan on the outskirts of Mexico City. Visitors flock from all over the world, and there has also been a movie documenting the couple entitled ‘Frida’.

American couple Ray and Charles Eames had a huge impact on the creative world, with their involvement in graphic design, film, fine art, modern architecture and furniture. 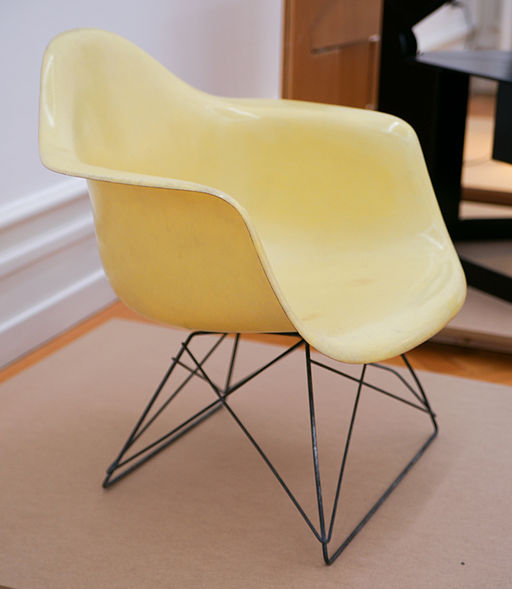 Charles was born in St. Louis, Missouri 1907. During his teen years, he worked for the Laclede Steel Company where he started developing architectural drawings, which then led to him studying Architecture at the Washington University in St. Louis.  He married first wife Catherine Woermann in 1929 and whilst on their honeymoon to Europe, he created a selection of drawings relating to the architecture of the buildings. Charles along with his partner Charles Gray started up their own Architectural practice in 1930.

In 1933 throughout his solo travels within Mexico’s three Northern States, having very little money, he would paint using oils and watercolours the town’s buildings which he exchanged for food and somewhere to stay.  In 1934 the St. Louis Post – Dispatch had an article featuring three of his Watercolours from Mexico, which were exhibited in St. Louis and Norfolk, Virginia. The couple moved with their daughter Lucia in 1938 to Michigan where Charles went to The Cranbrook Academy of Art to further study Architecture.

Ray Eames ( previously Bernice Alexandra ”Ray” Keiser) was born in Sacramento, California 1912.  Graduating from the Bennett Women’s College in Millbrook, New York 1933, she then moved to New York City to study Abstract Expressionist painting with abstract artist Hans Hoffman.  In 1936 Ray founded the American Abstracts Artist group, paintings from the group were later showed in 1937 at the Riverside Museum in Manhattan which has led to one of Ray’s paintings being a permanent piece in a collection at The Whitney Museum of American Art.

Ray’s mother passed away in 1940 and that same year her friend and architect Ben Baldwin recommended to her that she should study at The Cranbrook Academy of Arts. While abstract art was her main attribute, Ray opened up to the possibilities in other areas of art and design, which is where she began collaborating with Charles Eames.

Divorcing his wife Catherine in 1941, Charles later that year married Ray, the couple moved to Los Angeles, Califonia where they settled and began the journey in their career in architecture  & design.  Experimenting in Plywood & plastic furniture design, textiles, graphic & commercial artwork, film & photography the couple created the ‘Hang It All’, a spider-like colourful inspired metal structure for storage of hats, scarves and coats. The Eames storage unit, which is still a very popular piece of household furniture today cleverly maximising space within the home.  In 1968 they created the ‘Chaise’ chair, inspired by director Billy Wilder on his request for an office couch that he could relax on between filming. 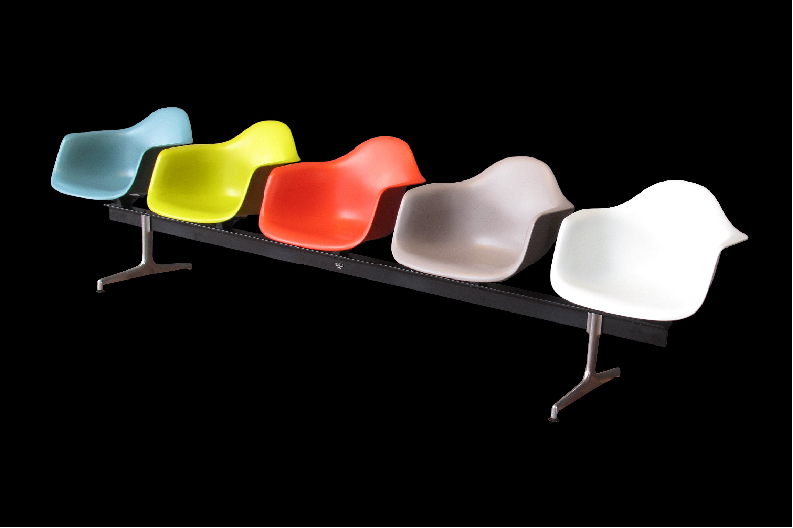 By Charles and Ray Eames (Own work) [CC BY 3.0], via Wikimedia Commons

They designed toys, such as ‘The Colouring Toy’ art inspired fun for children, ‘Toy Masks’, a mix between head and body masks of bright colourful birds and animals.  The start of designing the toys for children was prompted by the love of making toys that they could give to their family & friends children, eventually becoming mass produced.  Having also been a fan of modern design, the couple designed a number of architectural buildings, commissioned by others, as well as the build of their own home ‘The Eames House’, which they lived in and worked from with their studio space.

Charles Eames died in 1978 and Ray 10 years later in 1988.  The couple throughout the years brought much creativity to the world of art & design, their ideas still a strong point for design today. They were very clearly a duo in tune with one another leading them to produce some memorable outstanding work in Art & Design.

You can see why the collaboration and partnership works between Antony Gormley & Vicken Parsons through their love and passion for expressing the concept of space through sculptured forms & artistic impressions. 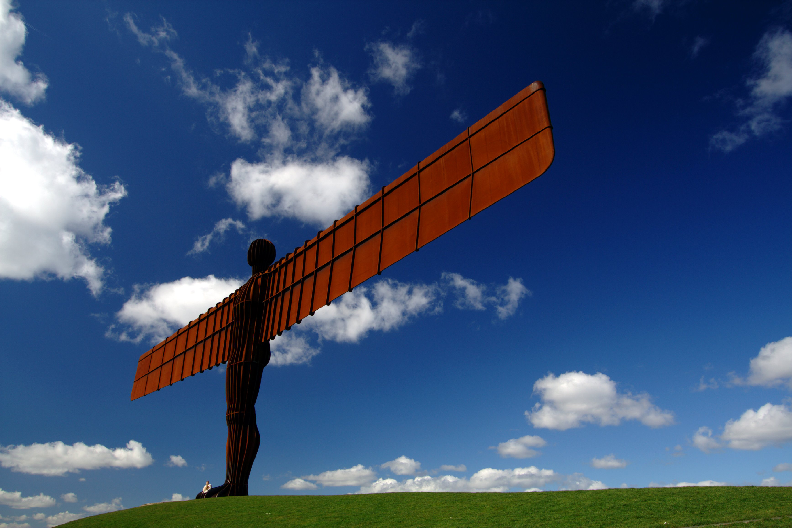 Antony born in 1950 is mostly recognised for his famous sculpture ‘The Angel Of The North’ in Newcastle and also ‘Another Place’  in 1997 which consisted of 100 iron figures placed along the Crosby Beach near Liverpool, which was faced out to sea.  After studying at St. Martins School of Art and Goldsmiths in London, Antony finally completed his studies with a postgraduate course in sculpture from the Slade School of Fine Art, University College, London.  Whilst attending the Slade School of Art, this is where Antony met his partner Vicken.

A solo exhibition at the Whitechapel Art Gallery in 1981 is where his career kicked off.  Most of his sculptures incorporate the human body with the moldings of the casts for his metal sculptures were taken from his own body.  He has had his work displayed publicly at several locations worldwide at sites in  London, also Madison Square, New York.   Antony Gormley is widely recognised and was successful in winning The Turner Prize in 1994, his works have also been displayed at the Tate Gallery.

One of five siblings, Vicken Parsons was born in Hertfordshire 1957.  While Antony creates sculptures on a number of different scales set within specific areas of space and detailing the perception of the human body form, Vicken with her work creates miniature canvases, around 15-20cm in size showing the contrast of ‘spaces within space’ and sculptures made of wood & steel pieces, mainly using oil paints, her work is frequently hung unframed.

Inspired by Interiors and landscapes, Vicken’s art is created from her imagination and not necessarily an actual visual. Vicken likes to experiment with light and dark formations of space and has since progressed with her work experimenting contrasts of sky & sea landscape formations.

Vicken has had exhibitions of her work in the ‘Kristine Konig Galerie’, Vienna… New art centre, Salisbury… Tate, St. Ives, also numerous exhibitions throughout England and Europe since 2004-present. The couple is now living and working in London.

“RiveraMuralNationalPalace” by Thelmadatter. Licensed under CC BY-SA 3.0 via Wikimedia Commons.